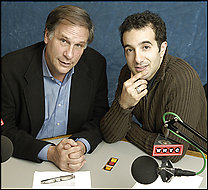 I’m a big fan of the often engaging and thought-provoking WNYC radio show podcast Radiolab. However, as the generally science-oriented subject matter tends to deal with things with which I have little personal experience, it’s hard for me to judge the soundness of the content. The loaded language of the presenters (“the results were… startling”) along with the constant use of cosmic sound design often gives the impression that the show’s creators are at least as interested in blowing the listener’s mind as they are in educating and informing (to be fair, the show’s sound designer, Jad Abumrad, has expressed concern for going too far, and has demonstrated at least one segment before and after having added music and sound effects).

There is one episode, “Musical Language”( 9/24/07), the informational soundness of which I am better able to judge. The episode is a good one, and I would endorse listening to it as an overview of, or introduction to, some of the material covered, but there was one glaring issue in the program that bothered me to the point of impelling me to write about it.

In one of the segments (dealing with the correlation between the tonal aspects of the Chinese language and the attribute of perfect pitch in Chinese music students), perfect pitch is characterized by Abumrad as follows:

“If you look in your music history textbooks, you will see that every famous composer, like the really big ones, they all had it. So, if you have perfect pitch, on some level you are closer to them. You’ve got the gift.”

riot that occurred during the 1913 premiere of Vaslav Nijinksy and Igor Stravinsky’s ballet Rite of Spring. Stravinsky is referred to as being considered “one of the most important composers of the 20th century, if not the most important.” It is certainly true that Stravinsky is one of the most important (or relevant or influential or however one might put it) composers of the 20th century, and he would be listed as such in any music history textbook of at least the last 50 years. What is not mentioned in the segment is that he did not have perfect pitch  –in fact, I remember reading that he had the worst ear in his class when studying under Nikolai Rimsky-Korsokov.

This apparent oversight bothers me for three reasons: First, it would be reasonable to infer from the information provided in the episode that Stravinsky had perfect pitch. Second, this may not just be an oversight on the part of the journalists who put the segments together. Abumrad, co-creator/host of the show, is a classically trained composer. He should know better. Finally, there is a mythic conception about perfect pitch that contributes to an ongoing and dangerous elitism in classical music as seen by outsiders and which is perpetuated by insiders. This elitism (of which ideas such as that of perfect pitch, too often portrayed as a practically superhuman attribute, is one of a handful of contributing factors) has played a big part in the demise of classical music as a viable feature of the contemporary cultural landscape.

Perfect (a.k.a. “absolute”) pitch is loosely defined as the ability to recognize and produce musical pitches without the aid of a reference point. It’s not really that big of a deal to have it. At any conservatory or university music program there are bound to be at least a few people with perfect pitch, but everybody knows that this ability in and of itself does not translate into outstanding musical talent, or even that it is obvious that it contributes to musical talent.

While it is true that many famous (and non-famous) musicians have had perfect pitch, it is not clear that all of those reported to have perfect pitch actually had it. You will find conflicting information about J.S. Bach (assumed, not confirmed), Frederic Chopin (probably not), Leonard

Bernstein (most likely did not), Claude Debussy (presumed to by many, but not confirmed), and Gustav Mahler (who seems to have had it as a child but not as an adult). Joseph Haydn did not have it, nor did many other famous composers I don’t have time to list here. There are also degrees of perfect pitch, such as the ability to recognize single pitches, but getting confused when trying to separate clusters of notes in an especially high or low registers of the piano; being able to recognize only a single pitch (such as a violinist recognizing ‘g’); not being able to recognize quarter or eighth steps or microtones in general; being able to recognize but not produce pitches; not being able to do it at all on days when you’re very tired. Just look at it this way: some people are better at distinguishing degrees of color and color content, and some people are better at distinguishing pitch content. It’s not known where most famous composers would have landed in this regard because it’s just not that important.

Getting back to Radiolab, Stravinsky definitely did not have perfect pitch. In the same segment, Stravinsky’s dissonant music is compared to the consonance of Richard Wagner’s, whose work is given as an example of “the great Romanticism of 19th century music.” They don’t mention that Wagner didn’t have perfect pitch either. Also, Wagner had plenty of dissonance in his time. In fact, I’d like to speculate here a bit about the correlation between the development of increasingly dissonant 20th century music and the lack of perfect pitch in those responsible. Wagner introduced a harmonic idiom (such as with his famous Tristan/Isolde chords) that would influence those who would construct the basis of the most complex harmonic theory to date; among them: Debussy, Arnold Schoenberg (not confirmed to have perfect pitch), and Stravinsky. In fact, it was implied in the Radiolab episode that one of the chords in Stravinsky’s Rite of Spring was the most dissonant ever heard.

Could it be that a lack of perfect pitch leads to increased musical freedom? That it perhaps enables the composer to go to places that would sound wrong, possibly even revolting, to a composer with perfect pitch? Wait… no, Ludwig van Beethoven (who might have had perfect pitch) went pretty far out there for his time with the dissonant harmonic complexity. Especially once he was practically deaf, that is (perhaps that’s the logical conclusion to what I’m suggesting with the whole not-being-constrained-by-ears thing; keep in mind that, with imagined dissonance, the inner-ear doesn’t experience the physical clashing that occurs in the material dissonance of the real world, which could influence a deaf composer to compose more dissonantly).

But then there’s Charles Ives, the father of American style harmonic dissonance, and whose music was much more

dissonant than that which was being developed in Europe at the time (Ives was unaware of those composers, in fact, and they of him). He supposedly did have perfect pitch, but his musical case is an interesting and unique one. He was trained by his father to do things such as play a song in two keys at once (he was also formally trained at Yale, but his father’s impression came first, chronologically and philosophically; so maybe Charles’ father, George Ives, is the real father of American dissonance…). This wasn’t purposeful atonality (lack of a key), this was two instances of diatonically proportioned music happening concurrently. His father wanted him to “stretch” his ears. Later, though, Ives would experiment with all sorts of complex harmonic structures with an aesthetic ideology that was more based on representing the constantly clashing sounds of the “real world” (including off-key singing) in his music than any kind of purely musical theory, and which included dissonance for its own pleasurable sake.

I’ve been reading a lot about Ives lately and will stop here before I get carried away writing about him.

And let’s not get started on John Cage, either, another very famous and important textbook composer of the 20th century who not only didn’t have perfect pitch, but it could be easily argued that he would not have been the important composer he was had he had the “gift.”

The upshot is that Radiolab must be taken as an entertaining way to be introduced to complex topics, and that perfect pitch is a tool which, depending on one’s perspective, may or may not be a benefit or liability to musicians and music in general, but is most likely irrelevant either way both in terms of one’s personal experience of music, and in the grand scheme of musical innovation and progress.

Deprecated: Directive 'allow_url_include' is deprecated in Unknown on line 0